On May 19–20th the Wisconsin-Illinois Chapter of the North American Rock Garden Society (NARGS) hosted the 2017 NARGS Spring Study Weekend in Madison, Wisconsin. More than 70 avid rock gardeners from across North America enjoyed a visit to the Garden, despite a cold and wet afternoon.

Matt Mattus, President of the North American Rock Garden Society, expressed one of many rave reviews for the Rock Garden. Mattus shared in his blog that the Allen Centennial Rock Garden is one of the best he has ever seen, with compliments to Ed Glover, the lead volunteer and manager of this thriving and vibrant plant collection. 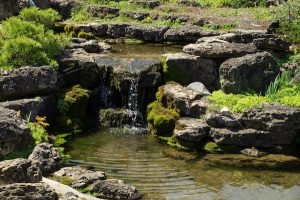 A common theme at the NARGS conference, headlined by Joseph Tychonievich, was the resurgence and popularity of rock gardening. Joseph’s new book, Rock Gardening: Reimagining a Classic Style, explores how and why this special garden style is due for a comeback. As an anchor of the Allen Centennial Garden plant collection, our Rock Garden is a wonderful showcase of the many shapes and forms rock gardening can take, from the Czech Crevice Garden to hypertufa containers for small spaces.

Are you considering starting a rock garden? Below, Ed Glover shares his top three points to consider when embarking on creating a new rock garden. To learn more, visit the Allen Centennial Garden or become a member of the North American Rock Garden Society. 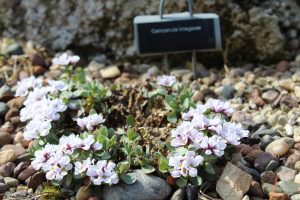 Allen Centennial’s Rock Garden is what it is because of the tireless and dedicated efforts of volunteers, especially Ed Glover, fearless leader of the “Rock Heads” volunteers. Also, through the support of Buck Gabelman, who supports a summer intern to specifically maintain this special space. The positive peer reviews from the conference continue to roll in, and it’s safe to say that the Garden can retain its standing as having one of the “Best Rock Gardens in the Midwest”.