The Agriculture Dean’s Residence is a stately Victorian Gothic home at the center of the Allen Centennial Garden. The Garden recently spoke with a past occupant, one who shared her story of growing up in the Residence as campus grew up around her.

Courtney Moffatt Brightbill is the granddaughter of Edwin Broun Fred. Fred was dean of the UW-Madison Graduate School from 1934–1943, and dean of the College of Agriculture and Life Sciences (CALS) from 1943–1945. Beginning in ‘43 with his appointment to CALS, Fred lived in the Dean’s Residence.

While Fred and his wife lived in the Dean’s Residence, the Allen Centennial Garden had not yet been developed (the Garden would be dedicated in October 1989). It seems only fitting the Garden would later develop on the site, as Fred was a lover of gardening. According to Courtney, he grew more than 200 tomatoes each year where the English Garden is today. Fred never really liked tomatoes, but his wife did! He grew tomatoes for her and was always giving them away to people he met.

Courtney also remembers her mother’s room, located on the northeast corner of the house on the top level of the turret that today overlooks the Woodland Garden. Courtney used to stay in this room when she visited her grandparents and loved the view from her window toward Lake Mendota. Courtney’s mother, Rosalie, had planned to get married in a beautiful sunken garden on the site where the Garden’s pond is now, but with rainy weather on her wedding day, she cozied up to guests and made her entrance down the grand staircase into the hall of the Dean’s Residence to say her vows.

Courtney herself got married in the Garden on July 12, 2017 under the gazebo overlooking the pond. We are thrilled she chose to return to the Garden for her own wedding day, and we’re especially grateful that she shared her stories with us. The Garden holds a special place in Courtney’s heart, and we wish Courtney and her husband a lifetime of happiness! 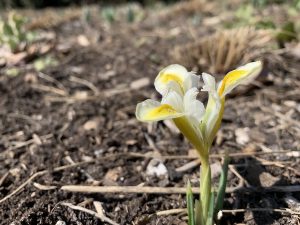