Allen Centennial Garden is the artful living laboratory and public botanical garden of the Horticulture Department at the University of Wisconsin-Madison. The Garden serves as an outdoor classroom for UW-Madison students and the surrounding communities, providing meaningful learning opportunities for visitors of all ages.

The Gardens are open from dawn to dusk.

The History of Allen Centennial Garden

The groundbreaking for Allen Centennial Garden took place on a bright and sunny July day in 1985. That morning was full of excitement and anticipation over how the vision of the University’s new horticulture garden would take shape in the two and a half acres surrounding the former Agricultural Dean’s Residence. As each shovel-full of dirt was ceremonially moved to celebrate the official beginning of construction, onlookers viewed the proposed layout for the Garden and began to imagine the space they had worked the previous four years planning, designing, and fundraising for. That morning marked the official beginning of a space that would serve as the horticulture department’s new teaching garden, but also a location that would later become a staple in the landscape of the University of Wisconsin campus and the greater Madison area.

Multiple principal donors were acknowledged for their early contributions to the Garden during the groundbreaking ceremony. The alumni of the class of 1935 were thanked for their many contributions made to ACG for their “Golden Anniversary” gift to the University. Two student organizations, the Horticulture Club and the UW Chapter of Pi Alpha Xi, were recognized for their ongoing fundraising and student engagement efforts, sentiments that began at ACG with those two groups, but lives on today in the Garden’s student intern programs. Ethel Allen was the other principal donor that was honored during the ceremony.

Ethel Allen, a former member of the UW faculty, received a Bachelor’s Degree in Botany, a Master’s Degree in Bacteriology, and an honorary Doctorate of Science from UW. She was a renowned naturalist and international authority in her field. A Madison resident and talented botanist, she was instrumental in providing monetary support for the early phases of Garden planning and construction. She remained an important member of the Allen Centennial Garden family until her death in 2006. Although Ethel made her donations to the Garden after her husband’s death, Oscar’s legacy is also memorialized in the Garden. Dr. Oscar Allen, prominent bacteriologist and professor at the University of Wisconsin from 1948 until his death in 1976, collaborated many times with his wife throughout his decades long career, even co-authoring what is considered the “encyclopedia” of the role of legumes in nitrogen fixation. The honoring of both Allens recognized their commitment to the University of Wisconsin and the horticulture department but also to one another. The completed Garden was dedicated in 1989 and was named to honor the Allens and also the 100th anniversary of the Department of Horticulture.

Although Allen Centennial Garden has been integral to the University for decades, it was not the first teaching garden on campus. The original teaching garden, named Babcock Memorial Garden in honor of the acclaimed Dr. Stephen Babcock, was located next to Moore Hall, but was replaced with the new Plant Sciences building in 1979. In the early 1980s, plans evolved for a new instructional garden surrounding the historic Agricultural Dean’s Residence, one block north of Moore Hall. The development of the Allen Centennial Garden was designed to complement the home and its existing plantings, including the Goff larch tree (Larix decidua), planted in 1899 to commemorate the birth of the dean-in-residence’s son.

The early years of Allen Centennial Garden reflected the education-centered focus of the Garden. The first director of the Garden was Dennis Stimart, a horticulture professor at UW that would eventually become the Director of the Horticulture Department. He worked to create a space that incorporated as much plant diversity and educational resources into it as possible. Directorship transitioned to Ed Lyon and staff changed but remained small as the Garden continued to focus on the education of horticulture students throughout the 2000s and into the 2010s. The early 2010s saw a shift in directorship to Ben Futa as well as in the goals of the Garden. Garden staff expanded and began creating programming that was aimed at wider campus and community engagement. The Friends of Allen Centennial Garden, a nonprofit booster organization, was created in 2013 to supplement the community engagement and fundraising efforts of ACG, further expanding the Garden’s ability to partake in public programming. 2016 saw a change in ACG’s name from Allen Centennial Gardens (plural) to Allen Centennial Garden (singular) in the hopes of highlighting the singular identity of the Garden at UW. ACG was forced to close its gates for an extended period of time during the coronavirus pandemic, but has emerged from its hiatus with new energy and vigor.

The Garden is built around a stately Victorian gothic house nestled on the agricultural campus. The house, known as the “Lake Dormer,” the “Fred House,” the “Agricultural Dean’s Residence,” and simply as “10 Babcock Drive,” was one of the first buildings on the agricultural campus and served as home for the college’s first four deans. It remains a cherished landmark for generations of students, alumni and friends of the College of Agricultural and Life Sciences. Each of the four deans, William A. Henry (1891-1907), Harry L. Russell (1907-1931), Chris L. Christensen (1931-1943) and Edwin B. Fred (1943-1945), played a major role in the development of the College of Agricultural and Life Sciences at UW-Madison. Dean Fred continued to reside in the house after he became president of the University in 1945. Although his time as president ended in 1958, he lived in the house until his death in 1980.

While the house is no longer used as the dean’s residence, it continues to serve a vital role within the university. The house has been used as offices for the Agricultural Research Stations and later included the College of Agriculture and Life Sciences Conference Services and Garden staff.

In 1984, the house was placed on the National Register of Historic Places. This provided overdue recognition of the building and its grounds and gave the residence its appropriate place among Wisconsin’s historic resources. Registration also saved it from certain demise as the campus grew and looked to expand classroom and research facilities.

Dennis received his undergraduate and graduate degrees in horticulture from the University of Minnesota. He became an associate professor at the University of Wisconsin in 1986 where he specialized his research in ornamental horticulture, specifically focusing on plant genetics and flower longevity. Dennis was eventually promoted to professor and served as the Chair of the Department of Horticulture from 2000 to 2008. With a passion for gardening that was passed to him from his mother, Dennis quickly became instrumental in the initial development, planning, and fundraising for Allen Gardens. Dennis genuinely loved flowering plants and spent much time and effort creating a space in ACG that taught horticulture but also could serve as a calm and peaceful presence within the city of Madison. He believed that the two and a half acre garden was critical to the University and spent his nearly 20 year tenure as director of ACG squeezing as much plant diversity into the space as possible. Dennis served as director of Allen Centennial Gardens until his retirement in 2009. He passed away in 2010.

Ed’s time at ACG was actually a second career after years of working in agriculture. He attributes his love of agriculture and growing to his parents and his mother’s acre sized garden where he was allowed to grow his own plants as a young boy. He earned his bachelor’s degree from Cornell University in animal sciences and agricultural economics. He farmed for many years before deciding to enter into the world of horticulture, and earned his masters degree in horticulture from the University of Wisconsin in 2001. He worked in the garden under Dennis Stimart during his grad school years and knew he wanted to return to ACG in the future. He returned as director to Allen Gardens for the 25th anniversary and made many improvements to the existing infrastructure during his six year tenure, including rebuilding walls, replacing the pond, and installing a new irrigation system. Ed also made improvements to the teaching aspect of the garden, working to diversify the plant life found within ACG and expanding the presentations of garden history and gardening style. He was particularly proud of the various themes employed by the garden throughout the years, highlighting the research and educational opportunities of specifically the ornamental edibles garden. Ed is currently the director of Reiman Gardens at Iowa State University. 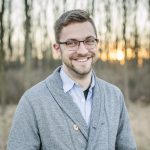 Ben received his degree in public horticulture from the University of Indiana, South Bend in 2014, and began his tenure as director of Allen Centennial Garden in May of 2015. During his time with ACG, he placed great emphasis on student engagement and making the Garden a place for all, not just the horticulturally inclined. Ben’s vision of ACG was a place where students could reconnect with themselves and relax, all while building awareness and respect for nature. He made those visions a reality by teaming up with student organizations to encourage student engagement, adding student internships, and pioneering student-centered activities, like Plant Adoption Day. By the time he left the gardens in 2020, he felt as if he had succeeded in creating an atmosphere within ACG that allowed students to feel at ease within the gardens. He now owns and operates a for-profit plant shop in South Bend, Indiana that explores the creative concepts related to the “culture” in horticulture.