Public gardens are what we call a “living museum” because like a traditional museum, we collect “things” – objects that allow us to tell stories. In the case of a garden, plants are our objects. What we collect and how we arrange plants are meant to not only be beautiful and compelling, but to inspire and engage our visitors in new conversations around a narrative of plants.

Unlike the works you might find in a traditional museum, the art of garden making is dynamic. Once a painting or sculpture is complete, it’s essentially static. A garden is the complete opposite. Gardening is more performance art, with movements and moods and choreography that ebbs and flows from one year to the next. This collaboration of elements requires finding a balance between the desire to tell stories and a desire for performance, and a recent garden project at Allen Centennial Garden has thrown this into sharp focus.

The New American Garden is by far one of the largest and most visible spaces in the Garden: a larger-than-life botanical tapestry that embraces our central lawn. The initial design was inspired by what’s known as the “New Perennial Movement,” a design aesthetic that embraces the full life cycle of perennials, from foliage and flower to fall color. One of the earliest and most notable practitioners was the landscape architects Wolfgang Oehme and James van Sweden. Since 1975 when Oehme and van Sweden founded their design practice, the style has evolved and been infused by countless designers both internationally and right here at home.

Piet Oudolf, a world renowned Dutch plantsman, is fond of saying, “A plant should look good when it’s dead. Brown is a color, too.” Roy Diblik, based at Northwind Perennial Farm in Burlington, Wisconsin, has been a champion for developing a holistic approach to planting design that integrates New Perennial concepts while embracing the ecological realities that come with managing strong and resilient plant communities.

In recent years, our New American Garden had become overgrown with shrubs and small trees. Typically defined by large drifts of flowering perennials and grasses that represent a stylized version of nature—usually in the context of a meadow or prairie—this space was in need of rejuvenation. If you’ve been to the Garden in the past few weeks, you’ve been able to see this rejuvenation in action!

1,038 plants, 396 volunteer hours, 10 yards of mulch, 6 weeks, and 3 truckloads of compost were removed from the site. This project has been a heroic undertaking for our entire community, and it would not have been possible without the help and support of so many. This season is just the beginning of this “new” New American Garden – over the summer as the plants become established, the drifts and blocks of color will begin to stand out. We’re featuring a rich and varied assortment of some of the best ornamental grasses on the market right now, and come September, they’ll steal the show alongside Asters, Goldenrods, Amsonia and seedpods.

The final effort comes this fall, when a spring bulb display featuring thousands of new blooms will be installed. Next year, the show will be spectacular.

I hope you’ll enjoy and appreciate the photos below that document the project so far. But, the real delight will be coming to visit this garden throughout the year – watching things grow and fill in. And, if you happen to see one of our rock star volunteers or interns working during your visit – give them a big “Thank you!” for their fabulous efforts to make this project a reality. 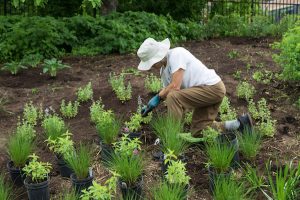 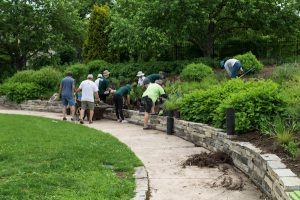 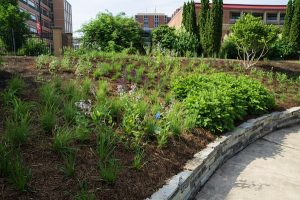